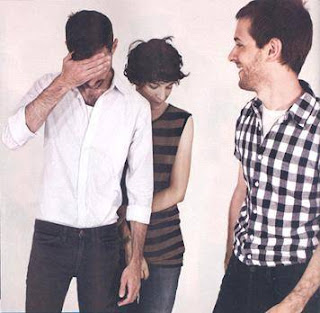 Unashamedly “sissy” and explicitly queer, The Ballet marry the DIY queer ethos of the Hidden Cameras with the wry poeticism of The Magnetic Fields to create literate, infectious pop gems. As well as taking inspiration from Stephin Merritt’s body of work, songwriter Greg Goldberg draws from an array of pop artists and periods, from 60’s bubblegum to 80’s synthpop and 90’s indiepop, fusing these in sophisticated and novel ways which rewards repeat listening.

Formed in 2005 by Greg Goldberg and Craig Willse (who are both professors and met whilst at graduate school) with Marina Miranda (who they met at a party), The Ballet are still going strong after eight years of pop magic, retaining their original line-up. The band previously self-released two albums (Mattachine! (2006) and Bear Life! (2009)), before the release of I Blame Society (2013) on Fortuna POP!

For those who of not heard of The Ballet could you please introduce your roles within the band and your musical style?

There are currently three of us in the Ballet: Craig, Marina, and I -- the three founding members of the band. I write, arrange, and record all of the songs solo. Our first album Mattachine! was arranged and recorded in a way that more-or-less reflected our live set-up at the time -- i.e. with very few extraneous instruments or layers. In recording our subsequent two albums (Bear Life and the new album I Blame Society) I wanted a little more freedom to experiment sonically, so the live show has diverged from the recorded albums -- the songs need to be translated from layered recorded versions to our currently minimal live set-up. For the live show, I provide provisional arrangements to Craig and Marina and we try them out together and tweak them until they work. Craig plays keyboards, I sing and play guitar, and Marina plays bass, though she and I switch guitar duties occasionally. We're currently using a vintage drum machine as well. I would describe our style as relatively mellow and melody-driven, with a general bubblegum-ness that draws from melodic pop from the 50's onward. I often use a pretty limited compositional palette -- three or four chords for most songs -- with "interest" in the intersection of melody, production, and lyrics. In terms of production, I tend towards a layered, textured, saturated sound, though I feel the appeal of minimalism as well.

Music is a kind of culinary pleasure, and I enjoy songs that sound cohesive and reveal their layers over time. The first La Casa Azul EP is like that for me. In terms of lyrics, I favour a relatively straight forward approach, sometimes narrating an experience from the perspective of a character, sometimes working outside narrative to capture a feeling or affect. I like lyrics that are intelligible but supple enough to accommodate multiple interpretations. I don't write autobiographically, but the songs generally address queer themes and experiences, since that it what is both familiar and interesting to me.

What are your influences, both musically and non musically?

Stephin Merritt is a big influence, particularly the albums Wasps' Nests, Holiday, and Get Lost. There are plenty of bands I've loved -- They Might Be Giants, Stereolab, La Casa Azul, lots of the usual indie suspects -- but I tend to go more by song than by band. I'm a somewhat lazy and unfaithful listener, generally useless for band/genre history and trivia. I'm basically a hedonist who will take pop pleasures wherever I find them.

How do you feel coming to the UK and what are your plans whilst you are here?

We played in London and Glasgow in early 2009. We had an amazing time and are very excited to be returning, and especially excited for Indietracks. We really have no idea what to expect, and are pretty open to whatever the experience brings, including awkward conversation, drunken dancing, and general mischief. While I take music-making very seriously, we're a band without professional aspirations (and with other professional commitments), which I think makes it easier to enjoy the vicissitudes of touring. We'll be playing in Glasgow, Nottingham, London and some other shows as well while we're there.