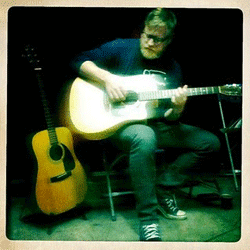 Today we're kicking off our series of 2011 Indietracks interviews. Between now and the end of July we'll be chatting with as many of this year's line-up as possible. Last year we interviewed 27 bands, and by a spooky coincidence we also interviewed 27 bands in 2009. Will it be 27 again this year? Stay tuned over the next few months to find out!

Our first interviewee from the Indietracks 'Class of 2011' is Birmingham's Simon Fox. Since disbanding post-rock pinoeers Grover, Simon has quietened down a bit, trading sweeping guitar theatrics for more intimate, acoustic-led songwriting. His songs have a personal, reflective quality, with deceptively rich arrangements, a disarming wit and a flair for creating intimate moods. Simon plays a wide variety of instruments, including guitars, banjo, percussion, keyboards, theremin, mandolin, even occasional brass and woodwind. We can't wait to see him at Indietracks this summer!

Hi Simon, tell us a little bit about yourself


I'm Simon Fox and I'll be playing solo at the festival. I used to be in Birmingham post-rockers, Grover, and now I do stuff as Fox, World Of Fox, Lonesome Fox, etc. I have released a bunch of singles and a couple of solo albums: "Everything Is For The Best", which is all original material, and "Respect", which is a collection of covers of songs from the 1980s which I released one song a month in 2010. The full CD is now available on Where It's At Is Where You Are Records. I'm pretty self-sufficient, recording all my stuff myself, playing all the parts. Live, I generally play acoustic guitar and banjo, but use effects pedals to build up different moods. You can stream all of my releases from the website: http://www.worldoffox.com/.

I recently played with label-mates Eux Autres when they came over for a UK tour. Their album Broken Arrow is lovely - spiky, classic indie-pop. Jonny are also great. They've managed to take the best elements of Teenage Fanclub and Gorky's songs and make something really special. They're also hilariously chaotic live.

Tell us about an unusual place you've played a gig in the past.

Grover once played the Oxford Union Debating Hall for a launch of a student magazine. That was pretty strange, playing full-on heavy feedback in the ancient oak panelled hall surrounded by busts of the great and good (and a bunch of slightly disturbed posh kids). When we first started out we also played a Velvet Underground set at Wolverhampton Art Gallery to accompany their pop art exhibition. That was a laugh - playing Sister Ray to polite gallery goers.

Isn't Indietracks excitement enough? Other than solo gigging and more recording, I also play in James Summerfield's band. For his next album we're going to record it live in the studio, which is something I don't normally do. That'll be good fun - if I can learn my parts properly! I've already had a lot of excitement this year - we recently went on a trip to the southern states of the US. We drove up from New Orleans, through Louisiana, Mississippi and Tennessee, taking in Clarksdale, Memphis and Nashville en route. It was a real musical odyssey and we got to see some really great live jazz, cajun, blues, country and bluegrass on the way. A real inspiration!

Do any band members have any claims to fame you wish to share?

I took John Peel out for a curry once. Does that count?

Yep, that definitely counts in our book! What's going to be on your compilation tapes as you travel down to Indietracks?

I'm going to do some research and try and pull together a comp of some of the bands playing who I haven't heard before. That'll put me in the mood and give us an idea who to try and see over the weekend. Of course, my girlfriend might just insist on putting Super Furry Animals on, as usual. Not that I'm complaining...

What attracted you to play the Indietracks festival?

Lots of my friends have been before and raved about it. A few friends of mine have also played before (MJ Hibbett, Pete Green) and said how lovely it was. We were planning to come this year as punters anyway, but then you asked me to play! Ta.

I love Jeffrey Lewis and always catch him when he plays. We're lucky because he always plays Birmingham (he's friends with Misty's Big Adventure). I saw Edwyn Collins at ATP, backed by Teenage Fanclub. That was a lovely, emotional show. I'm looking froward to seeing him again. I'm a big fan of J-Pop, so I'm going to make sure I check out Sloppy Joe. Sounds right up my street!

Brilliant, thanks Simon - see you in July!
Posted by Indietracks at 12:53