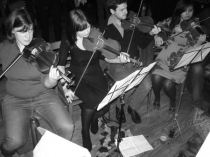 Today we're interviewing A Little Orchestra, a London-based indiepop orchestra led by Monster Bobby of The Pipettes. We're joined by Bobby and violin player Nat, who tell us more about their orchestra....

Hello Nat and Bobby! We've never interviewed an orchestra on the Indietracks blog before. Why don’t you tell us a little bit about yourselves?

Nat: We have been together for just over a year now, and we all met when Bobby advertised for members to come and join a small pop orchestra. We’ve got around 12 full-time members, although the number does change! Recently we have been playing a lot of indiepop shows and also collaborating with indiepop singers and bands.

Tell us about an unusual place you've played a gig in the past.

Bobby: I once played a show in a bar in Berlin which was run entirely by French people and everything was upside down. Upside down furniture, discarded keys and bits of crap stuck to the ceiling, a bookshelf, hanging from the ceiling, all of its books stacked along the top of their respective shelves. On stage, the light was so bright in my face that I couldn't see any of the audience!

Nat: As an orchestra, we played in Nettlefold Hall at Norwood Library as part of the Read and Shout festival in March. We weren’t quite playing amongst the book stacks, but it was so lovely to play such an unusual venue.

What's going to be on your compilation tapes as you travel down to Indietracks?

Bobby: Barry Gray's early sixties advertising jingles; Delia Derbyshire and Brian Hodgson's music for The Legend of Hell House; songs from The Backyardigans; songs from the Ghana Special compilation; 'Cool in the Pool' by Holgar Czukay; 'It's not the bullet that kills you - it's the hole' by Laurie Anderson; 'Sacrifice of the Virgin' by Les Baxter; Billie the Vision and the Dancers; Belbury Poly; Vanity 6; Inga Rumpf & I.D. Company; and lots of French disco - Claude Francois, Dalida, etc.

Bobby: I'm going to Thailand soon, and hopefully I'll finish writing my book too before too long.

Nat: I’m actually getting married the weekend after Indietracks, so I’ve got a pretty exciting summer in store! As an orchestra, we’re playing for How Does it Feel to be Loved? in June, and we’re also hoping to put on our own charity show at the Kilburn Tabernacle before the end of the year. It’s a tin church built to look like the inside of a ship, and the interior is absolutely beautiful.

Nat: We’re hoping to invite along some very special indiepop guests, but you’ll have to wait and see! To give you an idea of the sorts of collaborations we've done before, here's a video of us playing with Darren Hayman at the Read and Shout festival.

Bobby: I shall be particularly looking forward to seeing Edwyn Collins, whose A Girl Like You was a teenage favourite when I used to stay up listening to Mark and Lard's Radio One graveyard shift long before I fell in love with Orange Juice. Also, I have never failed to gain tremendous enjoyment from watching Suburban Kids With Biblical Names, Chris T-T, Moustache of Insanity and Pocketbooks.

Nat: It's really hard to choose, but I'm a massive Gorky's Zygotic Mynci fan so probably Jonny, although I'm also really excited about seeing The Sweet Nothings and A Fine Day for Sailing.

A Little Orchestra are playing with Electric Soft Parade and Ooberman this Saturday (April 30) at the Amersham Arms in New Cross, in a tribute concert for their late euphonium player Edd, who sadly passed away from an undiagnosed heart condition last year. The concert will raise money for Cardiac Risk in the Young and the Ruby Lambert Trust. Further details are available at We Got Tickets.
Posted by Indietracks at 10:00