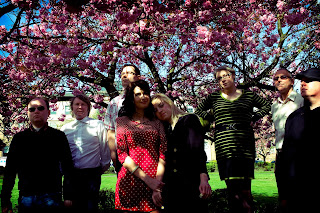 Today our interviews for 2011 reach double figures, which means that the festival is getting ever closer! We're delighted to be chatting to Basil from Butcher Boy ahead of the release of their much-anticipated new album Helping Hands later this summer. Butcher Boy are from Glasgow in Scotland and have been performing since 1997. Their debut album ‘Profit in Your Poetry’ was released in 2007 on London-based label How Does It Feel To Be Loved?. Their second album, ‘React or Die’ was then released in April 2009 and received ecstatic reviews, including glowing five star reviews in the Times and Sunday Telegraph.

This summer, their latest album ‘Helping Hands’ will be released (hopefully in time for Indietracks!) on Damaged Goods. And as Basil mentions, the forthcoming Indietracks 2011 compilation (available from next Monday!) will be the first chance to hear one of the new Butcher Boy songs!


Hi Basil, Tell us a bit about the new album Helping Hands. Which are your favourite songs from the new record?

Wow - straight in with the hard questions! There's lots of changes of tempo and feel and three instrumental tracks on the album, so it's hard to choose. But as we're giving the Indietracks compilation a download of 'I Am the Butcher' I'll go for that as my favourite for today. This is the first track from the new Butcher Boy album Helping Hands available anywhere! It's a weird wee song that sounds Scottish and vaguely Spanish at the same time and swings along with what the old folks refer to a 'a good beat'. The title references the band's name of course, and one of John's favourite French films 'Le Boucher', so thematically there's a lot going on even before you get your ears around the lyric. I also got to make a nice twangy sound with my Guild Duane Eddy guitar and a plate reverb - and if the kids don't like that then there's no hope (these opinions and observations may not necessarily reflect those of the band, or anyone else for that matter...).

Butcher Boy seem to play live very rarely. Would you like to play more shows or go on tour?

I think we'd all like to be making music full-time but with the exception of our string players we make our livings doing other things. If we were younger (specifically me!), or doing less demanding jobs, or had fewer commitments then we'd probably try and play more shows. However, I think that because we don't play live that often, when we do it means more to the band than if we played regularly. We're not about to become blase or jaded any time soon!

We want to do more shows around the album launch (hopefully July, definitely through Damaged Goods). We actually enjoy touring, we treat it as a holiday where you go out every night in a different town and meet old pals.

You've played in bowling clubs, libraries and film theatres in the past. What do you think makes a perfect venue for a Butcher Boy show?

Anywhere that isn't a regular 'rock' venue works well for us - we try to make each show special and memorable for everyone involved and on a pragmatic level there's too many of us to fit on most stages. Having said that, some of our best shows have been at the likes of the Luminaire and Metro (it has been a long time between tours...). I fancy doing a tour of arthouse cinemas or community centres in the Scottish highlands.

What are your favourite memories from playing Indietracks in 2009?

Oh, we had a blast in 2009! Indietracks is a real gem of an event, like a church fete without the religion and better music. It's the only time we've played a festival and it was a lot of fun. In fact it was the first time most of the band had even been to a festival...So there's no-one more surprised than us that playing in the daylight worked and that we enjoyed it.

My favourite memory was seeing Cats on Fire play in the engine shed - they were on magnificent form. I'd promoted a show in Glasgow for them a couple of days before and had the pleasure of their company as houseguests so I was rooting for them anyway, but it felt like my team won!

Who are you looking forward to seeing at this year's festival?

We did a day trip in 2009 but we'll be there on the Saturday for the duration this time. I'm hoping to catch Edwyn Collins as he's as close to a hero as I have these days. The Hidden Cameras are insanely good live so I'm looking forward to seeing them and singing along. We haven't seen the running order yet so I'm hoping to avoid a clash (hint, hint). Also, our John is doing some National Pop League style dj-ing and that, along with real ale, is a cast iron guarantee of a good time! I'm also looking forward to having time to see some new bands and hopefully take a train ride.

Thanks Basil - can't wait to see Butcher Boy at the festival!
Posted by Indietracks at 12:38