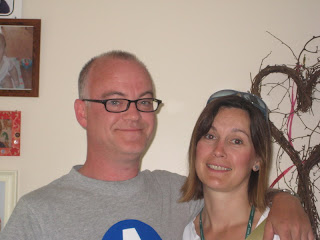 We’re thrilled to say that this year’s Indietracks will be hosting a wedding! Gary Morgan, who plays drums for Ballboy, will be marrying his fiancée Sarah on the Sunday morning, with the ceremony taking place in the signal box on the Swanwick festival site. Gary’s popped by to tell us all about it…

Sarah and I met at the Brunton Theatre Musselburgh back in 1997 where we were both working. She is a primary school teacher and was working there part time as part of the Front of House team and I was Stage Manager. We used to get together after work as a team at a nearby pub and that is where it all started between us.

The band were booked to play at Indietracks on the Saturday night, we as a family (we have two sons), were making plans to come down anyway and Sarah noticed that the signal box had a license to conduct civil marriages. We had been talking and thinking about getting spliced for a while, but we had not found a place, or a time, or a way to do it that clicked. It tickled us both the idea of getting married in the signal box, there would be the opportunity to combine our celebration with wonderful atmosphere at Indietracks. It just feels right.

We are getting married in the signal box on Sunday morning at 10am. We are keeping the arrangements fairly loose, but we will celebrate there for as long as is appropriate and as we are camping, we plan to put on a “reception” barbeque sometime in the afternoon at the campsite. It is very informal and we want to catch a lot of bands of course. And if people want to come along and join us, that would be just fine.

Friends and family are pretty excited by it all. It is a bit of an adventure to up sticks and head for Derbyshire for a bit of a do, so these are the logistics we have been sorting out. The biggest surprise in all of this was that in order to get married in England as non residents (living in Scotland), we have to stay in England eight days and eight nights before we can register the marriage. That was a bit of a surprise.

I like to imagine as we are wed, as in a story of Thomas the Tank Engine, all the locomotives blow their whistles and people throw their hats in the air and shout hurrah! I think the boys would like that.

We look forward to seeing you all around and about!

Gary
Posted by Indietracks at 11:43