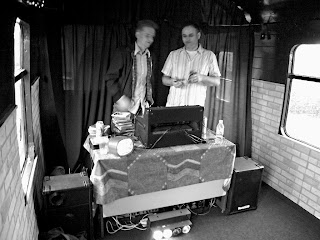 (Photo: Jens Hoffmann)
Chuffing 'eck! We're SUPER excited to have Indietracks' first ever DJs - Sam Metcalf from A Layer of Chips and Andy Hart from A Fog of Ideas - with us today, to talk about their (in their opinion) ignominious DJ set at the very first Indietracks event in April 2007. You might also be interested to know that Andy is also the hugely talented chappie who designed this year's Indietracks logo, fact fans.

Sam: I don't really remember the details, to be honest. I'd met Stuart a couple of times in the lead-up to Indietracks at gigs in Leeds and Nottingham I was putting on. He was handing out some flyers there. I think he must've asked me then. I've never been asked to DJ anywhere since. I'll let anyone read whatever they want into that. I'm not the world's greatest DJ...

Andy: Sam asked me, it was the night before, I’ve no idea why to this day but I’m grateful, although he caught me at a disadvantage as all my records and whatnot were back home so I was forced to select from Sam’s picks...

Casting your minds back, can you remember what you played?

Sam: Heaven knows. (There might be a theme appearing here). I remember Camera Obscura's 'Let's get out of the this Country' was a favourite album of mine at the time, and so I probably played 'Lloyd, I'm Ready to be Heartbroken' about 15 times, like I used to at Don't Start Feeling All "Romantic" - a club night some friends of mine used to run, and at which I used to fail very badly at DJing.

Andy: I don’t remember very clearly but Sam played ‘Lloyd, Are you ready to be Heartbroken’ by Camera Obscura and then I played it a few songs later and then Sam played it again for good measure... I remember insisting that ‘Other People’s Girlfriends’ by Sportique got played and it did and folks were busting moves and we both agreed on ‘Sweet and Tender Hooligan’ by The Smiths. I think Sam played ‘The Day that Thatcher dies’ by Hefner. Whatever we did play, it all seemed to be received rather well despite the sound cutting out for ten seconds or so every other minute... which we thought was a bigger problem than it turned out to be

And how was it for both of you?

Sam: It was terrifying somehow. I'd asked Andy to help me out, and so there were the two of us, stood in this deserted train carriage behind a few fairy lights with a slack handul of CDs between us. We started playing some songs, and, every so often the generator would go down for a split second. Which wound me up to begin with, but then became quite amusing (honest). And, eventually, enough people made it into the carriage to make it all worthwhile, and we had a great time. It only lasted about half an hour, but by the end I could've carried on for at least another four minutes.

Andy: I think I can say with some certainty that Sam did fret rather more than I did and at one point exclaimed ‘this is so unprofessional’ like he was Mariah Carey or something. I just stood there like the big useless lump I am- but people were dancing on a moving locomotive train and when the sound dropped out nobody cared, they sang the missing bits and carried on dancing. It was very much a ‘let’s have the party right here... on a steaming train’ kind of a feeling. It was a lot of fun, it felt like a train wreck (for us) at the time but immediately after Tonieee from The Parallelograms/Plouf! said it was the best disco he’d ever been to... and somebody else quite liked it too, so that was nice. The DJ sets that followed (from Offbeat and Spiral Scratch) kind of made us look a bit rubbish, to be fair, but we were the first- nobody can take that away from us. We’ve never been asked back to DJ, mind.

Hee, we're struggling not to imagine Sam as an indiepop Mariah at this point! So, did you recover sufficiently to return to any Indietracks events since?

Sam: I'm proud to say I'm an ever-present. It sounds quite trite to say it's the best weekend of the year because there other things out there in The Real World that probably mean more, but, for me, it really is. I even made it to the two Christmas events - both of which were cold enough to test even the hardiest pop fan.

Andy: All bar one (the very last Christmas Twee one... I think I was tobogganing in the Cairngorms)

You're obviously pretty hardcore fans then - Christmas Twee was freezing! What does Indietracks mean to you, then, as fans?

Sam: I mentioned The Real World before, and, come the revolution, The Real World will be like an Indietracks weekend. Mutual respect, love for each other, genuine creativity, just enough cynicism to keep things grounded, toilets that work, and Finchley Ted. You can find all these things in the Communist Manifesto if you look hard enough, and for one weekend a year you can find them all in the middle of Derbyshire. I've met people at Indietracks who are now proper friends, and where else can you find Mark Hibbett pissed up in a ditch by 6pm each day? Well, for us outside of London, that's a rare treat. I can't speak for those living in the capital. In summary: it's ace.

Andy: It’s just all rather special, unique and lovely. It’s that sense of shared goodwill and everybody wanting it to be smashing and it never fails to be anything short of smashing or ace or skill. And I get to get my legs out.

And, on that leg-based visual bombshell, we'll leave Sam and Andy to continue reminiscing about that amazing first Indietracks. Thanks you two!
Posted by Indietracks at 12:30