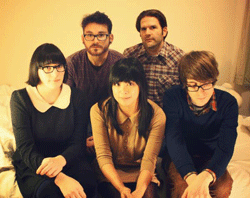 Today is Indietracks interview number three and Ian from Pocketbooks interviews our first international band, Very Truly Yours from Chicago, USA. Not only will this be their first indietracks but also their first time in the UK. The band have been quietly making a fuss on the indiepop scene for the last couple of year and we're really proud they've agreed to come and play for us.

Getting to the UK isn't cheap though, so the band have set up a donation page. Why not get an exclusive demo CD of the band’s first album, appear in a music video or even have them record an album for you?

Anyway, on with the interview...

On a scale of 1 to 100 - how excited are you all about your upcoming UK mini tour and Indietracks?

110 !!! This is quite exciting for us. I can't rate the excitement really. This is my first time to the UK, so personally, it's really unbelievable.

How would you describe your sound for those who haven't heard you yet?

We are a pop band that finds delight in pretty, female harmonies and 1960's influenced arrangements.

I first heard you on the split Cloudberry CD with The Understudies and the album seemed to come along pretty soon after that - they sound quite different, were they recorded a long time apart?

Before Very Truly Yours, Lisle and I were in a band called The Lorimer Sound. After the band broke up, I had these songs that I didn't know what to do with ("1234", "Pop Song 91", and even "Ballad of Growing Up", which is on the full length.) There was a short lapse between TLS and Very Truly Yours, and when we started working with Roque and Cloudberry, we were a four piece. We didn't have any idea of what kind of music we would create, we just knew that we wanted to do it together.

Since I was a teenager, I dreamed of being a chamber pop band. I have a somewhat formal classical background, and am intrigued by well-crafted instrumental arrangements in pop music. This dream in my mind became more of a reality, when in 2009, we began rounding out our sound to create "Things You Used to Say."

The good thing about music is that it can reinvent itself. I have been very fortunate to have such talented musicians believe in Very Truly Yours. We are excited about our new songs (another Cloubderry release!), which have evolved in such a way that draws back to our Pop Song 91 roots but still stays true to this sound that we've tried to achieve.

Rumour is there's not much of an indiepop scene in Chicago - is there anything going on to shout about?

Ha! This is true. We hosted an Indie Pop Prom in Chicago a while back, as a fundraiser for our SXSW tour which was a success. But unfortunately, nothing much to shout about.

If you could pick your own Indietracks headliner for this year, who would it be? You can say yourselves.

Wow! I would love to see The Siddeleys and Aislers Set. Lisle would want to see Field Mice, Acid House Kings, and Shonen Knife.

Will you be camping at the festival?

No...Lisle and I are booked at the Travelodge, and the other members are doing a bed and breakfast, I think. I'm afraid I'm not a good camper, although touring has made me quite used to sleeping in places other than my bed.

Finally, have you ever signed off an email saying Yours Sincerely, Very Truly Yours?

Of course! But I used to work at a law firm, so Very Truly Yours was standard. It's not really the nicest closing to say, although it does sound very sweet. I do like to say Yours Sincerely, but it sounds a little too old-fashioned to me!

And here's Very Truly Yours putting in an amazing performance on Chicago's Chic-A-Go-Go TV show!