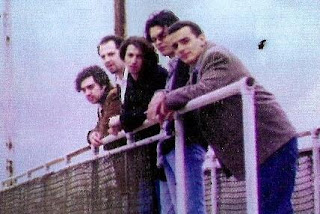 Today we're interviewing one of the many overseas bands playing at this year's Indietracks festival. Next Time Passions hail from Athens, Greece and originally formed over twenty years ago! Their songs recall several noteable indiepop bands from the late eighties and early nineties, including some Sarah Records artists like St. Christopher, Brighter, Another Sunny Day, and The Field Mice.

Their only releases were the 'Angel Flower' 7” on the Greek label This Happy Feeling label  in 1993 and a split 7” with Impossible Tymes on the Spanish label Elefant Records in 1994. However, several of their songs such as 'Not Here Anymore', 'Feeling So Real', 'Sunday Sore' and 'She', are also included on indiepop compilations on labels from around the globe, including Shelflife and Pop Art.

We spoke to Billpos from the band ahead of their Indietracks appearance.

Hi, tell us a little bit about Next Time Passions

Next Time Passions have recently got back together again, 14 years after our dissolution in 1996. We're starting to record new material, and we're aiming to show the same dedication to authentic music.

The new line-up of the group consists of six members, now with a drummer and new bassist (Dimitris from One Night Suzan). We are all hardworking family men, and the band is our only leisure, psychotherapy, and creative form of entertainment. Away from the group, we like books, film, sports, comics, djing and concerts.

What music are you enjoyng at the moment?

We all listen to many different kinds of music, but if we have to spot a common axis from all that, it would be the good melodies from indie pop, jazz, groovy, funk soul, electronics, garage, psychedelic and others.

What's going to be on your compilation tapes as you travel down to indietracks?

Wow, I guess it's a long journey from Greece though! What attracted you to play the Indietracks festival?

Indietracks festival is the most intense and honest thing that happens regarding the independent pop sound. Additionally, it's very close to Next Time Passions philosophy and sound. We are exited that we’re going to play in front of such an audience and we hope the audience feel the same about us!

They definitely will! See you at the festival!
Posted by Indietracks at 09:00