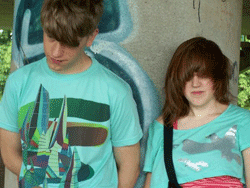 It's just ten weeks now until the festival starts! Hopefully you've already got your tickets, travel and accommodation sorted, in which case, please sit back with a cup of tea and enjoy the next in our series of short Indietracks interviews!

The Bumblebees are an indie pop trio from Bristol, UK, consisting of Rosalind Glennie (vocals, keyboard), Ellis Jones (vocals, guitar) and Daniel Howard (vocals, drums). They began in November 2007, and their debut EP 'The Bumblebees' was self-released in September 2008. They are currently working on their first album, to be released on the independent record label Local Kid.

Hi Ellis, Roz and Dan, tell us a bit about the Bumblebees... We live in part Bristol, part Oxford, part Staines, and therefore occupy that under-utilised middle ground between Massive Attack, Radiohead and Hard-Fi. We have a combined age of 64, a combined height of 16 feet 2 inches, and a combined name of Ellisrozdan.

What are you up to this year? Our first and last ever debut album, and HOPEFULLY (attention promoters) a summer tour culminating in Indietracks! We released our first EP in 2008, so it's seems like it's been a long time coming. We've spent big bucks on big name producers and guests on this one - we really felt like it had to be perfect.

What will be on your compilation tapes as you travel down to the festival? We don't agree on much, musically or otherwise. Roz and Dan especially. We have this thing called 'the Roz-Dan' rule, which dictates that if one of them likes something, they other has to hate it. However, on the rare occasions that they do agree on something, that makes that OBJECTIVE FACT. So it is an objective fact that these songs are awesome:

'Sexy Friction' by Jackolantern (Winston Echo's hallowe'en-themed rap collective)
'100s and 1000s' by Ace Bushy Striptease
'Thundercloudbusting' by Jelas
'Boredom' by Buzzcocks
'Electronic Picnic' by The Restaurant Mystery
'Oso Panda' by Papa Topo
'March of the Father Fists' by The Music Tapes
'Carry the Zero' by Built to Spill
'Celebration' by Cats and Cats and Cats
'A Good Man' by Zipper
'Sneaky Sneaky Dog Friend' by Connan Mockasin
and Kimya Dawson to drive Roz insane.

Do you have any surprises planned for the Indietracks festival?Well, it wouldn't be a surprise if we told you know, would it?!

Well it will be great to see you there anyway, surprise or no surprise! Thanks Bumblebees!

Edit - 13 July: Unfortunately The Bumblebees are now no longer able to play at the festival this year. They have have been replaced by the wonderful Sock Puppets.
Posted by Indietracks at 11:00