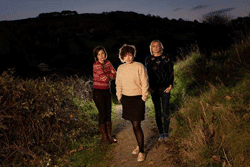 Haiku Salut are Gemma, Sophie and Louise. The Derbyshire-based instrumental group use accordions, organs, ukeleles, glockenspiels, pianos and loop pedals to create gorgeous melodies. Their debut EP, How We Got Along After The Yarn Bomb, is set for release soon by Team Strike Force!

Hi Sophie, tell us a little bit about Haiku Salut...

We are Gemma, Sophie and Louise and we are based in the peak district - not too far from Butterly Station coincidentally! We have an army of temperamental instruments which we constantly battle with to try and write something cohesive. We use a loop pedal, an accordion, glockenspiel, a piano, reed organ, ukulele and classical guitar and heavens knows why but we try our upmost to make the songs as complicated as possible. Other collective hobbies include, geocaching which someone once described as a pastime which uses multi-million pound technology to find somebody's lunch box in a tree (if this doesn't sell it to you go and look it up! It truly is great). We also take part in the mysterious act of yarn bombing which is a type of street art or graffiti which uses colorful displays of knitting or crochet rather than paint. We will possibly pop a few up at Indietracks, so keep your eyes peeled! Lastly we used to be in another band that played at Indietracks a few years back. I think they were called The Die Drys or something.

Me (Sophie) and Louise DJ together every Monday night in Derby, due to the clientele we mainly get requests for Tina Turner, Simply the Best and 'Funky House'. This can often be distressing, but instead of letting this puncture a hole in our smug indie exterior we continue to exercise our rights as music nazis and try to educate them with brute force of the volume slider. We've played Why?, Yuck and Best Coast a lot in recent weeks. Louise has recently expressed a great love for the new Black Keys record, Gemma is eagerly awaiting the next Kimya Dawson album (we're secretly hoping this one won't be about nappies though) and I'm currently into anything that is horrible and sounds like a Nintendo, see Sabrepulse. See also World's End Girlfriend. Although this will probably be a fad and will hopefully pass.

Yes! Firstly we are releasing a 3" CD on Team Strike Force! called 'How We Got Along After the Yarn Bomb' - the whole package is going to be lovely, the songs we've put on there are lovingly and intricately hand crafted and much sleep was lost labouring over the artwork. Oh and the release also comes with a Haiku Salut comic! This will be available on the merch stall at indietracks if you want to gander at its immense beauty.

Also we will be toddling off to play in Sweden at Cosyden 2011 in August which is going to be mega.

We are currently planning something literally quite big for our live set at indietracks but if we told you what that entails it wouldn't be a surprise would it?

Thanks - can't wait to see what the surprise is!
Posted by Indietracks at 13:00