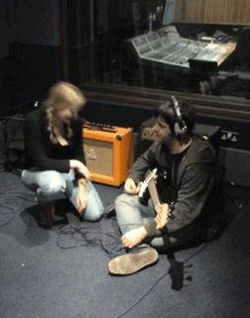 The Whatevers are an indiepop / lo fi DIY punk band from Leeds in the north of England. Online releases so far include 'Rhapsody In Blue Jeans/ You And Your Twisted Romance' on Holiday records, and 'Art And Sex, an album available on Bandcamp. Mike writes the songs and Kate sings them. Al plays the bass guitar. The band have just finished their second record 'All Your Indie Heroes'.

Hi Mike, tell us about The Whatevers... Kate and I were childhood indie sweethearts in a tiny little town in North Yorkshire. We made fanzines and played gigs in the youth club and all that stuff. We met Al last year when he started listening to us obsessively on lastfm. Rob is Kate's brother and he is playing violin with us for this acoustic show as well as drumming on our next record.

Do you have any exciting plans for the rest of the year?
We're trying to do at least three albums of new material in a year. The first two are available for free download on Bandcamp now along with a bunch of odds 'n' sods and the next one will be much more spontaneous and collaborative and louder and shoutier. We should have the physical copies of our debut 'Art and Sex' album ready to sell in time for Indietracks which we're really excited about. So all told we will be releasing about fifty songs in our first real year as a band, and also playing round Britain for the first time!

What are you most looking forward to at Indietracks?
Indietracks is our first real 'proper' festival gig so we are just excited to see all the great bands and to be a part of it, we are most excited for all of it really!

Thanks Mike!
Posted by Indietracks at 13:00