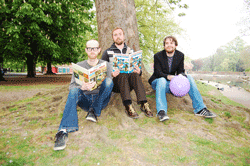 Today's interview is with Heroes of the Mexican Independence Movement (HotMIM), a bunch of spaghetti western indiepop bandits from East Yorkshire and London.

The band features ex-members of The Rocky Nest, Fonda 500 and The Loves and was formed in January 2011 by ex-Nesters Paul John Sarel and Tom Nash with Chris Norrison of Dead Sea Diver. Live they play stripped down sparkly Velvet Underground third album style pop, complete with stand up Mo Tucker drums, maracas, guitar, bass, vocal harmonies and tamborines. They occasionaly feature Simon from The Loves on extra guitar and fuzz organ. The bright jangly nature of the songs hides a seedy undercurrent of sex, booze and secret handshakes in songs such as 'The Last of the Tea Drinking Temperance Meetings' or 'Beekeepers Central/Northern Region'.

Currently recording in bedrooms, hallways and farm buldings with ex Salako (Jeepster) and Bitmap man Mr Luke Barwell, the band plan to self release their debut recording on their own 'DiY Hi 5' label in time for the summer. Today we're joined by Paul from the band for a few questions...


Hi Paul, what music are you enjoying at the moment?

Well I for one have mostly been listening to and watching Jonathan Richman today, I really love the one about dancing in a lesbian bar. There is a clip on YouTube that I always go back to with Jonathan wearing his stripey jumper and playing his enormous guitar and he does his little dance. He kinda looks like a sad uncle at a wedding but for some reason Jonathan gets away with it. It's fantastic.

Simon Love is listening to The Velvet Underground.....it is the law for Simon to listen to them everyday otherwise the Lou Reed Police Department (LRPD) kick his door in and lock him up....that's why Simon Love loves HotMIM, cos we love The Velvets.

Well, we're always recording so finishing an album's worth of stuff is always on the agenda. There is also a good chance we'll be doing a split single with another band, but we're not sure if we can mention that yet so it'd be unfair to name them. We're also starting up the regular DiY Hi 5 nights that The Rocky Nest used to host (two of us are ex-Nesters). They'll be a whole gang of us doing a collective in Hull... films, videos, art, gigs, fanzines.... The first one is on June 3rd (featuring The Understudies) at the Hull Adelphi. The plan is to expand it slowly and hopefully by next year put on a few indiepop alldayers... hey if any one wants to play give us a shout popkids.

Do any band members have any particular skills, hobbies or claims to fame you wish to share?

Not sure if it's worth bragging about but I played on the b-side of a single by the band Athlete back in 2003... do you remember Athlete? It got to number 41 in the charts!.

Our drummer Chris has an unusual habit of only being able to clean his flat whilst wearing his glasses (they actually have no glass in them they're just frames), he often does this at two o 'clock in the morning after we've finished a band practice round his place. He also drums in his glasses. Look out for them at Indietracks.

Simon Love has too many talents to list but very few people know his real name is actually Simon Hate.

This is a tough one... the reason being that last time I attended Indietracks and spent most of the time wandering around just soaking it all up and just chancing it with whichever bands I stumbled upon.

I found that the most exciting way to discover new stuff and I'm not one for being told by people what bands I should see. I really like to make my own mind up and Indietracks has so many bands I've never seen before that I'm sure I'll discover my new favourite band right there hopefully. I'll then obsess about them and collect everything by them before moving onto something else in three months time. I'm a right fickle git me. Last time it was Helene.........Helene were ace.

Thanks Paul - see you in July!
Posted by Indietracks at 13:52