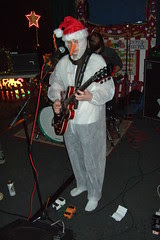 Hello everyone! Well.....have you recovered yet? Wasn't it GREAT! Who can forget the Christmassy marquee, the storming sets from all three bands, that Snowman outfit and the disco in the dark? There's already a few reviews online - check out the blog of Kris from A Smile and a Ribbon, who entertained everyone with his wonderfully chosen records - and you can see his uber-impressive playlist there too! Also, we just want to say a big thanks to reviewer Julie Weston and her young daughter Mabel who came along from Egigs- visit the site to see her fun review and pictures.

Some of our fave photos from the night are in this post - including one of organiser Stuart looking slightly crazed - but you can also see more on Emma Pocketbooks' Flickr page! 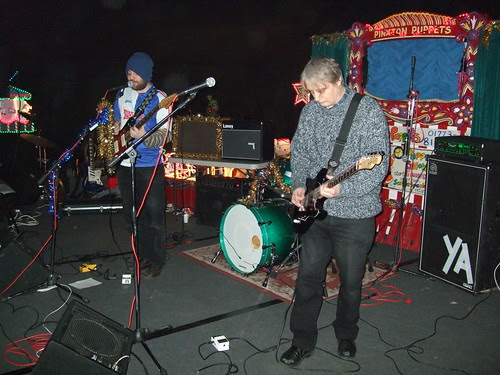 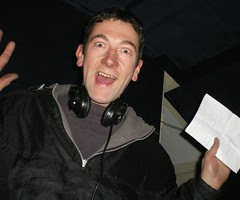 Posted by Indietracks at 06:54 No comments:

Only one more day to go til Christmas Twee now, and we can barely contain our excitement any more - don't forget to make your Secret Santa CDs! There's also a really useful running order up now on the website too. Good luck choosing your dancing shoes and glitzy festive outfts! In the meantime, the ever lovely Horowitz talk to us about attracting indiepop bands to Stoke, their year in music and what makes their perfect Christmas...

Hello Horowitz! You're managing to attract lots of top-notch bands to play in little old Stoke-on-Trent at the moment through your Sunny Inside nights - how's that going and what will happen in the future?

Ian: It's not going! At least, not for the forseeable future. The Glebe is closing, as far as we know, so the legendary Marillion painting may be lost forever.
Pete: Stoke's dead in the water for indiepop, so that was reason enough to have a go and do it. We got inspired by Spiral Scratch and the bands and shows around the SPC label in Sheffield and once we discovered how easy it was to make a manageable financial loss on each night, there was no stopping us! Really, it's been great and that's been largely thanks to the bands we've asked who haven't thought that playing in Stoke is a waste of their time and effort. We're very grateful! They've all been memorable popshows for one reason or another. I mean, who can forget Fairy's (Deirdres) rugby tackle on Mark Hibbett as he was about to take to the stage? Or how about all of A Smile And a Ribbon plus cases squashed into my car and me looking in the mirror, seeing a jumble of happy but tired faces crammed together. Then there was the Cloudberry records night (one of our proudest moments), where we put together a zine and Roque provided the 3"cdr. There have been the small but magical moments too, like people bursting into spontaneous applause after a Pocketbooks soundcheck; Pete Green filling in on the spot, playing a great set on electric guitar; tattooed barstaff sequence dancing to the Parallelograms. I could go on and on. The nights have been as friendly and informal as we can make them, and there's always a few tables booked at the local curryhouse for the food and get together afterwards. That seems to be a recurrent theme - the post-popshow curry and most bands seem keen on the idea! We've been very lucky in that there've been people like Marianthi, Dunc and Debbie, Trev, Popkid and Pete G who've made numerous visits. Rocker, our Sunny Inside resident DJ, travels up from Bristol for the nights - and drives back the same night! It's enthusiasm like this that sustains us - that and the "wasn't that a great night" feeling.

What are Horowitz's plans for the next year or so?

Pete: We have a raft of recording to do - a single on This Almighty Pop, a 7" single on Lost Music and a Jonathan Richman cover on a Fortuna Pop compliation album. Before any of those should be the release of a 7" single on the superdooper Cloudberry Records and a track called Drop The Hat on a WeePOP! compliation. We'd like to play around the UK in places we haven't yet played and we'd love to get over to Sweden too. Fingers crossed, we can make it to the 09 New York popfest - if we can get work permits, of course! ;)
Ian: The plan is to get those records done and dusted.

What attracted you to playing at Christmas Twee, when you were asked to step in for Cars Can Be Blue?

Ian: We would have come along anyway! I really enjoyed DJing on the train last year with my friend Jamie C, so I have lots of fond memories of Christmas Twee.
Pete: We were looking forward to coming along as spectators/drunken dancers, when Stuart invited us on to the bill to replace Cars Can Be Blue after their awful experience with customs. Naturally, we were delighted to be asked.

What can fans expect from your Christmas Twee appearance?

Ian: Beards. And a couple of new songs! We had stopped playing our cover of Jonathan Richman's Government Center, but Pocketbooks are insistent, so we're not going to argue.
Pete: It'll be fuzzy and noisy! We'll be playing both tracks from the Cloudberry 7", if we can stand up by that point (the real ale bars are a big attraction!) but if anyone's expecting us to be wearing Santa hats they'll be disappointed!

Oh no! I'm sure you would've looked great in them! What have been your fave indiepop moments from the last year?

Ian: Everytime we've played with the Manhattan Love Suicides has been pretty special. Having Zipper come over from Spain was something else.
Pete: Yes, it was an amazing time when Zipper were over. It was the first time we'd organised anything like that and to get to play shows with them was great! The Manhattans playing Heat And Panic as the last song at the Glebe was a perfect ending. I love that song! There have been so many memorable moments:- personally, helping Pete Green out with recording his Platform Zero ep was a great thrill and a lot of fun to do; joyful shows with Liechtenstein and A Smile And A Ribbon; reading Trev's (Lost Music) Pains Of Being Pure At Heart tour diary, where you can feel him getting more and more tired as the week goes on; being ecstatic at the Pains/Manhattans show in London and Pocketbooks at Indietracks; the New York popfest; Indietracks.......

What are you listening to at the moment? Are there are any new bands you're excited about?

Ian: I have been revisiting the sounds of my teenage years, so lots of Pavement, Sparklehorse and Yo La Tengo. The Give It Ups are exceptional and well worth checking out
Pete: Right now - "The Give It Ups sing" cd. I love it! The Pete Green Corporate Juggernaut are a great pop group.

Tell us what makes a perfect Christmas for Horowitz..

Ian: Stilton, walnuts and real ale! I like spending time with the family.
Pete: I try to forget all about it! I like a few beers but that's normally the case!

Good luck Horowitz - we'll look forward to seeing you on the Santa train! Lovely chappies that they are, they've also give us a free mp3 for you. Called 'How to Look Imploring", it's the A side from their forthcoming Cloudberry Records 7'' due to be released early next year, and it's FANTASTIC! Enjoy!

Horowitz are Ian and Pete from Stoke-On-Trent. They are into all things DIY, noisy and FUN! Their infectiously catchy fuzz-guitar pop tunes have already delighted pop kids at the Indietracks 2007 festival, and now we're pleased to announce that they're back to play at Christmas Twee!

They released their debut album, Frosty Cat Songs in 2006, a must-have for any indiepop record collection, and have since released the excellent Traceyanne single.

We're really excited that they're joining us!
Posted by Indietracks at 16:18 No comments: