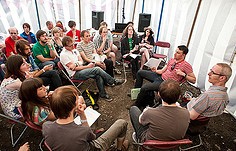 Fortuna Pop! supremo Sean Price enthralls a tent full of people keen to learn how (not) to run a record label!
(Photo: Underexposed)﻿
One of the many, many things we love about Indietracks is the wonderful workshops run by talented volunteers each year. There is always a range of brilliant activities for both children and adults, and in previous years we have made jewellery with Tatty Devine, got crafty with Craft Guerilla, learned how (not) to run a record label with Fortuna POP!, made stop motion animation films and even played indie pop Guess Who!

We're really keen to run workshops again this year, so please do get in touch if you're interested in getting involved. You will be able to run your workshop in a designated tent and - of course - you will have a free ticket to the festival.

The deadline for workshop applications is April 29, and we will contact successful applicants shortly after that.

If you would like to submit an application please read the small print below and send an email to indietracksalice@gmail.com containing the following information:

- Have you run a workshop before?

- What your workshop will be about

- Will you charge for your workshop?

- Have you been to Indietracks before? Any interesting stories to divulge?

You must provide all materials to run the workshop with - Indietracks has nothing!

You can charge for people to participate in the workshop but it must be cheap (less than £5) and the money should only be used to cover materials and not be your beer or travel money!

There are two weekend festival passes per workshop.

You will be able to sell your stuff on a stall at the festival over the weekend. We charge a standard merchant fee for a stall. Details on costs and the application process are available on request.

Please note we are keen to keep the workshops child-friendly and we are open to suggestions for workshops specifically aimed at children too.

There have been increasing requests for non-craft based workshops, so we are hoping to vary the schedule more this year.
Posted by Indietracks at 10:00 No comments:

We’re very excited to announce that international indiepop favourites Jeffrey Lewis and The Hidden Cameras will be among the headliners of this year’s Indietracks Festival.

Early bird tickets are now on sale for the festival, which takes place on the weekend of 29-31 July 2011 at a steam railway in Derbyshire.

Jeffrey Lewis has become one of the front-runners of the anti-folk movementsince releasing his official debut album on Rough Trade in 2001. The New Yorker has been described as “the best lyricist working in the US today” by Jarvis Cocker, and as “the Big Apple’s best-kept secret” by the NME.

The Hidden Cameras, hailing from Toronto, have released seven albums, including three albums and an EP on Rough Trade, and are the brainchild of Joel Gibb. Their live performances are often elaborate, high-energy shows, featuring go-go dancers in balaclavas and choirs. The BBC described their most recent album, Origin:Orphan, as “a serious and sophisticated musical force to be reckoned with”.

We’ve also announced seven further artists from across the globe: Math and Physics Club (US), The Wendy Darlings (France), The Sweet Nothings (UK), Next Time Passions (Greece), Very Truly Yours (US), The Garlands (Sweden) and Zipper (Spain). Further headliners and day bands will be announced very soon!

Tickets are available now from www.instantticketseller.com/midlandrailwaycentre or by calling 01773 747 674 during the daytime.

We hope to see you at this year’s festival!

Just a quick message to let you know that we're planning to make an announcement at 7.00pm today!