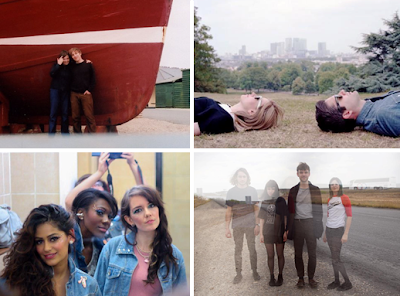 Scottish indiepop favourites The Pastels and cult London band Still Corners have been added to the line-up for Indietracks 2013!

Other bands added to the bill today are Big Wave, David Leach, Frozy, Good Grief, Milky Wimpshake, The Beautiful Word, The Fireworks, The French Defence, Fear of Men, The Magic Theatre, The Tuts and When Nalda Became Punk.

Early bird tickets! Cheaper tickets are now available at an early bird discount price of £65 (weekend) and £35 (day). These cheaper prices are available until 5pm on Saturday 11 May. After this date, prices will be £72 (weekend) and £38 (day). So it's £7 cheaper if you pick up an adult weekend ticket early!

Tickets are available by calling the Midland Railway on 01773 747674 or online at:
https://www.instantticketseller.com/midlandrailwaycentre

The Pastels, hailing from Glasgow, released a series of records for labels such as Creation and Rough Trade between 1982 and 1985, and featured on the NME’s famous C86 compilation. However, by the time they released their first two albums Up for a Bit With The Pastels (1987) and Sittin’ Pretty (1989), their sound had moved from garage pop-punk through to ballads with synth orch splashes. They subsequently signed with Domino Records and released two albums, Mobile Safari (1995) and Illumination (1997), which saw them develop a warm, melancholic sound. They then went on to release a soundtrack to David Mackenzie’s film The Last Great Wilderness (featuring a collaboration with Jarvis Cocker) in 2003. More recently they released album Two Sunsets in collaboration with Japanese band Tenniscoats, to widespread critical acclaim. The band now operate their own Geographic Music label through Domino and are partners in Glasgow's Monorail Music shop. In February this year the band announced they would release Slow Summits, their first full length album in 16 years, on Domino Records.

Still Corners is the musical project of songwriter/producer Greg Hughes and vocalist Tessa Murray. The London-based duo signed with record label Sub Pop in 2011 and issued their first full-length debut, Creatures of an Hour, to rave reviews. In October 2013 the band released a new single, “Fireflies”, which was named “Best New Track” by Pitchfork. In February this year they announced that their second album, Strange Pleasures, will be released via Sub Pop in May.

Other bands announced for Indietracks so far include Camera Obscura, Bis, The Ballet (Canada), Flowers, Martha, The Understudies, Fever Dream and American band The Secret History, who will be visiting the UK for the first time.

Hope to see you in July!
Posted by Indietracks at 19:00 No comments:

Edit - 14 July: we're looking for a couple more volunteers. If you're interested, please read the following details and send us your form, ideally by Wednesday 17 July. Thank you!

Stewards
All stewards will work shifts and, where required, will be directing festival goers to the site, assisting with ticketing and wristbanding and stewarding the site. Some festival experience is an asset but not necessary.

Stage Assistants
We are looking for enthusiastic individuals with some experience of stage management, either at festival or gig level. This would be an ideal position for an events management student looking for some work experience, or someone with experience who wants to assist in the running of the festival. Each volunteer will work in pairs, managing each stage. This will involve meeting the bands from arrival to the site, helping them find their way around, making sure the bands are ready on time, and collecting their PRS forms.

For both positions, you must be able to arrive on site by midday Friday 26 July for induction and site preparation and be available to work shifts throughout the days on 27 and 28 July. In return you will receive:

Please note you will have to make your own way to and from the festival site. A deposit in the form of your camping fee will be payable which will be refunded on successful completion of your duties.

If you'd like to apply, please download an application form from the following link and, once you've completed it, send it to indietracksvolunteers@gmail.com before Friday 26 April 2013.

If you would like to apply to work with a friend, mention this in the comments and we’ll do our best to make it happen. Please also let us know if you have volunteered in previous years.

If you have any questions, also e-mail us at the above address and we’ll do our best to answer them.

As we're busily preparing for this year's festival, we realised that we completely failed to blog about this great video from last year.

It's a 45 minute video (get your cups of tea ready!) with Salle Pierre Lamy puppets Edgar and Bryce chatting to Allo Darlin', Tigercats, Tender Trap, Cosines, The Smittens and Velodrome 2000 at Indietracks 2012. It includes some live footage and some lovely shots of the railway. Enjoy!


Posted by Indietracks at 12:57 No comments: 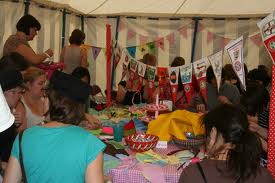 Workshops will again be happening again this year at Indietracks, and we are hoping for a new, creative mix of sessions. If you would like to submit an application please read the small print below and send an email to indietracksalice@gmail.com by Friday 19 April 2013 containing the following information:

You must provide all materials and equipment to run the workshop with, Indietracks have nothing!

You can charge for people to participate in the workshop but it must be cheap (less than £5) and the money should only be used to cover materials and not be your beer or travel money!

There are two weekend festival passes provided per workshop.

You will be able to sell your stuff on a stall at the festival over the weekend. We charge a standard merchants fee for a stall. Details on costs and the application process are available on request.

Please note we are keen to keep the workshops child-friendly and we are very open to suggestions for workshops specifically aimed at children as these are generally very popular.

Workshops sessions are one hour long including clear-up time. We also may have space for longer interactive workshops in a new space in the festival site, so please get in touch if you have any different ideas.

The application submission deadline is 19 April 2013. We will let the successful applicants know shortly after that. Feel free to email Alice with any questions before you submit your application.
Posted by Indietracks at 12:11 No comments:

Travelling to Indietracks via Nottingham?

East Midlands Trains have announced that Nottingham station will be closed between 20 July and 26 August 2013, including during the Indietracks weekend.

If you’re travelling  by train to Indietracks from most major UK cities, we’d suggest either travelling directly to Derby or Alfreton rail stations and catching one of the following buses:


There will also be a rail replacement bus service running between East Midland Parkway and Nottingham. Trent Barton Rainbow Bus No.1 links Nottingham train station to Ripley Marketplace about every 20 minutes, Monday to Saturday, and you can walk from there to the Midland Railway entrance in Butterley.

Otherwise, bus services such as National Express and Megabus will be running to Nottingham as usual from across the UK. (Derby might be slightly better for the campsite though, as above.)

If you’re travelling by public transport, please use Transport Direct or thetrainline.com to plan your journey. These sites provide information three months in advance, so should be able to help from the end of April onwards.

Any questions, please feel free to send us an email and we’ll try and help: indietracksfestival@gmail.com 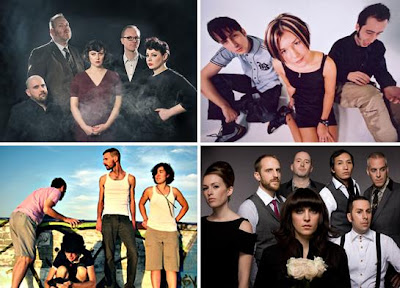 Scottish indiepop favourites Camera Obscura and Bis are among the headliners for this year’s Indietracks Festival, held on the weekend of 26-28 July 2013 at the Midland Railway in Derbyshire.

Also playing Indietracks this year will be The Ballet (Canada), Martha, Flowers, Fever Dream, The Understudies, and American band The Secret History, who will be visiting the UK for the first time. We'll announce lots more bands shortly!

Camera Obscura are bringing their refined cinematic indiepop to Indietracks, marking the release of their forthcoming album, "Desire Lines" in June 2013. The Glasgow band released albums "Biggest Bluest Hi-Fi" (2001) and "Underachievers Please Try Harder" (2003), before enlisting Swedish producer Jari Haapalainen in 2006. The resulting album, "Let’s Get Out Of This Country", featured entrancing pop gems such as "Lloyd I’m Ready To Be Heartbroken", alongside more downbeat yet melodic offerings. The band signed to the legendary 4AD label in 2009, and their fourth album "My Maudlin Career" again showcased the band’s  sophisticated pop, including "French Navy" and "Honey In The Sun". 2010 saw the band tour Europe, USA, New Zealand, Australia, Japan and Indonesia.

Bis are a Scottish indiepop band composed of John Disco, Manda Rin and Sci-fi Steven. In 1996, they famously appeared on BBC’s Top of the Pops, performing "Kandy Pop", and released a series of EPs, three of which entered the UK Singles Chart. Bis quickly won fans with The Delgados and The Beastie Boys, who signed them to the Chemikal Underground and Grand Royal labels respectively. They released three studio albums; "The New Transistor Heroes" (1997), "Social Dancing" (1999) and "Return to Central" (2001), gradually moving from frenetic punk pop towards a more electropop sound.  The band reformed in 2010 to play at the Primavera festival, and will perform on the Friday night at this year’s Indietracks.

Around 50 indiepop bands from across the globe will be playing across four stages: the outdoor stage; the indoor stage, the church and on the steam trains themselves. The festival will also host a range of art and craft  workshops and a selection of discos after the bands finish.

This is the seventh annual Indietracks festival, which takes place at the Midland Railway in Ripley, in the heart of the Derbyshire countryside. The site houses a whole range of lovingly restored steam diesels and locomotives. Festival goers are allowed to have unlimited rides on the steam railway over the weekend and full access to other railway attractions and museums.

For further information about the festival, please visit: www.indietracks.co.uk

Hope to see you in July!

Posted by Indietracks at 19:00 No comments:

Hiya, just to let you know that we're expecting to announce a few Indietracks bands and put tickets on sale at 7.00pm on Thursday 7 March.

Thanks so much to all the bands who applied to play at Indietracks. The deadline is now closed. We've been enjoying your applications and will be in touch with some of you very shortly.
Posted by Indietracks at 15:44 1 comment: