Arson attack on the Midland Railway - Your help needed! 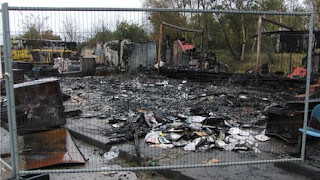 Both buildings were destroyed, as well as a selection of model trains, controllers and tracks built up over the past 20 years, which were one of the railway's top attractions for tourists. The nearby Allports shop also caught alight, but the fire was put out quickly before too much damage was caused.

The Midland Railway Centre has now offered the Swanwick Junction Club a temporary home while it raises money to build a new brick base for them. Alan Calladine, Midland Railway Trust Development Officer, has also said that security will be stepped up at the site while investigations continue. Police are treating the fire as suspicious, although no-one has been arrested as of yet.

As you know, Indietracks couldn't happen without the Midland Railway and the hard work all of its amazing volunteers, so we are now making an appeal for donations from anyone wishing to help repair the damage and build a new home for the Swanwick Junction Club.

If you would like to donate money towards the railway, please visit their railway donation page at https://midlandrailway-butterley.co.uk/donationsform.html to make a contribution, using the "general donation" button.

Or, as an alternative way of donating, why not become a member of the Midland Railway or even give a gift of annual membership to a friend or family member for Christmas?  It costs just £19 for adults, or £8.50 for children, and as part of your membership you receive the regular Wyvern magazine. You are also able to travel on the Midland Railway - Butterley trains at reduced fares, as well as being involved in the future development of the railway.

Visit http://www.midlandrailway-butterley.co.uk/membershipform.html to apply for your membership now, and help raise money for the railway!
Posted by Indietracks at 09:56 5 comments: