Emmy the Great to play Indietracks! 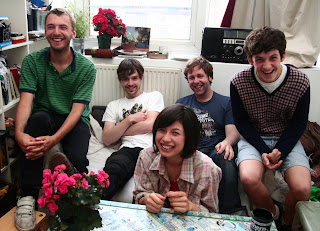 We’re very excited to announce that critically acclaimed folk popster Emmy the Great as a second headliner for Indietracks, alongside Camera Obscura.

The London-based singer-songwriter, who will play the Indoor Stage shortly before Camera Obscura’s set outdoors, is the second headline act to be announced for Indietracks, held on 24-26 July, 2009 on the Midland Steam Railway in Derbyshire. More headline acts will be announced shortly.

Emmy will be joined by the hotly-tipped Butcher Boy, scuzzy guitar-lovers The Manhattan Love Suicides and sophisticated chanteuses Help Stamp Out Loneliness. Over 50 bands will play the festival in total, including BMX Bandits, Lucky Soul, Frank and Walters and The School.

Wake The President, Friends, The Rocky Nest, Zipper, King of Cats and Poppy and Friends have also just been confirmed.

Emmy the Great released her debut album, First Love, in February 2009 on her own Close Harbour record label after receiving glowing reviews for a clutch of limited edition singles and EPs. Renowned for her evocative lyrics and inventive rhymes, she has toured extensively with artists such as Tilly and The Wall and Martha Wainwright. Her live band includes Euan Hinshelwood of Younghusband, Tom Rogerson of Three Trapped Tigers and Ric Hollingbery of Pengilly’s.

This year, Indietracks is teaming up with legendary Elefant Records as part of the indiepop label’s 20th anniversary celebrations. The Madrid-based label, which was launched by Luis Calvo in 1989, has picked a number of bands to play on a special Elefant stage over the course of the weekend, including La Casa Azul, Cola Jet Set, Cooper, Nick Garrie, Single, Speedmarket Avenue, Tender Trap and Fitness Forever.

We will be interviewing Indietracks bands over the weeks leading up to the festival, so do keep reading!
Posted by Indietracks at 22:52 1 comment: