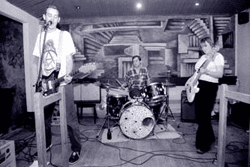 Today Sam Metcalf from A Layer of Chips interviews Pete Dale from Milky Wimpshake. Referred to by some as punk folk and twee skiffle, the Newcastle Upon Tyne based band have released numerous singles and four full albums since forming in 1993. They last played at Indietracks in 2008 and we're looking forward to welcoming them back this year...

Hello there Pete! What did you enjoy about Indietracks when you played last?

Good weather, great atmosphere, unique place to for a fest, all good really! Like a lot of people, I imagine, I could use a bit more musical variety because, well, I like all kinds of stuff, but hell, Indietracks really does cover the stuff it covers in immaculate detail, one has to admit that! And all the people I've dealt with and met at the fest have been lovely so, y'know, I well enjoyed it basically!

Which other festivals have you played in the past?

We played a good one in Sweden in, um, 2004 or 2005? Can't remember the name now, out in the countryside, I got to hang out with Vic Godard which was like, um, I can die now! I also played these London Pop Fests, always cool, and, y'know, played Piao fest back in 1994, that was good! Played lots of fests really - not Glastonbury yet, though!

Who else are you looking forward to seeing at Indietracks?

Will you be hanging around for the entire weekend?

What do you make of the big festivals in the UK?

Last time I went to a big festival, Nirvana were headlining! That's not my scene, mate! But I guess they're exciting when you're 18...

Will your be a greatest hits set?

Nope; but we'll play some old faves, and about half the set will be new songs, including four brand new unreleased numbers!

Which stage would you play on if you had a choice?

The big shed needs soundproofing, just some sheets draped across the back wall would help (Ed: We've added these in now Pete!
And can you name you dream festival headliners? Three choices, please.

How about Fugazi, Hendrix and Talulah Gosh?

Milky Wimpshake are playing a Which Way is Up! show tonight at the Wilmington Arms, alongside The Wind Up Birds and The Kick Inside. Tickets cost £5 from We Got Tickets.
Posted by Indietracks at 11:00