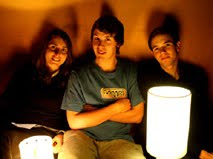 Planes are back in the sky, we’ve just announced The Primitives, the sun has started shining again and over at Indietracks HQ we’re in a pretty fine mood, and keeping everything crossed that this good weather hangs on til July. After such a long and gloomy winter, it finally feels as though summer is properly here, which of course means it’s also officially time to start planning our Indietracks wardrobes – woo!

We’re also in an especially good mood because today we’re featuring an interview with the fantastic Standard Fare, the Sheffield band who have been making our hearts beat that little bit faster for ooh…..the last year or so now. Comprising Emma Cooper (bass, vocals), Danny How (guitar, vocals) and Andy Beswick (drums), they released their debut album The Noyelle Beat on Thee Sheffield Phonographic Corporation last month, garnering a whole bunch of glowing reviews and radio appearances, as well as effortlessly stealing the hearts of indiepop fans across the country. We spoke to the band, fresh from an appearance at South by South West (SXSW) and a tour of North America, about their tour stories, tips for surviving festivals and just how personal some of their songs really are…

Hello you three! The Noyelle Beat has deservedly been getting lots of positive reviews and radio plays. How does it feel to be receiving so much positive attention, and do you have a set long-term plan for the future of the band?

Emma: It's great that the album has been received so well. It's a little odd for us as we've been playing these songs for a while now we forget how it is to hear them for the first time.

Dan: I don't think we have a plan really; we were quite surprised so many people were interested in the album! But that's just given us more enthusiasm to write new things and challenge ourselves a bit

Emma, you said in a previous interview that your mum (former member of anarcho-punk band Poison Girls) had a strong influence on you as a developing musician. Does she listen to Standard Fare/come to gigs? And would you ever consider a musical collaboration?!

Emma: Yeah, she loves the band's music and comes to gigs when she can. I'd love to collaborate with her. Probably not bass duels (!) but maybe trying to figure out the cross of indiepop and klezmer - the kind of music she plays. (Ed: We had to look this one up on Wikipedia. Klezmer is the musical tradition of the Ashkenazic Jews of Eastern Europe, and you can read more about it here on Wikipedia, fact fans)

You recently played SXSW festival and toured the North East of America too - what was the experience like, and how did it compare with other gigs that you've played? Did you have any interesting experiences while on tour?

Emma: It was such an adventure to go to the US and each gig was so different but thankfully all positive and everyone was very friendly!

Andy: There were a lot of crazy experiences. One was when we were driving to New Haven from Philidelphia to perform. There was torrential rain, it was dark and there were loads of enormous trees fallen in the road that we had to keep swerving around, and the Americans just seemed fine about it. You don't get that in the UK.

Sounds scary! A lot of your songs are about very specific, and sometimes intensely personal situations. Are your songs mainly autobiographical? How does your songwriting process work?

Emma: I don't really have much of an imagination - I just write about experiences. Dan's songs are a little less like therapy, and instead a little more craft.

Indietracks always divides everyone into campers and non-campers. Are Standard Fare campers or Travelodgers? And do you have any handy festival tips for our readers?

Dan: I don't live all that far away, so I can't decide whether to rough it or commute, but the thought of being able to stop up drinking might just sway it for me.

And finally....what other bands are you looking forward to seeing at Indietracks?

Emma: Allo Darlin' are a big fave of ours at the moment, but also The Smittens and of the course The Pains of Being Pure at Heart, who headlined our SXSW showcase gig.

Andy: Everyone and everything.

Us too - look forward to seeing you there! If you can't wait to see Standard Fare at Indietracks, why not watch this video of them performing Philadelphia at SXSW?
Posted by Indietracks at 19:45