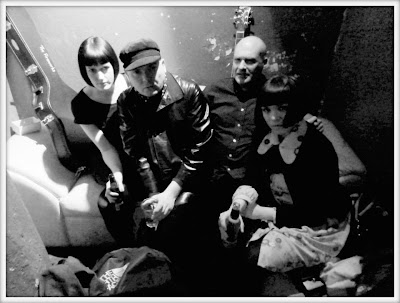 The Fireworks began in secret in 2011 when Matthew would sing some of his songs over the phone lines to his friends. Over time they convinced him to start a real group so everyone could hear them. Close friends Emma, Isabel, and Carys were finally drafted in and the band began in a burst of noise, snap, crackle and P!O!P!.

They immediately started playing gigs, including Indietracks, Indiepop Days Berlin and the Nottingham Indiepop Alldayer, and recorded a session for Dandelion Radio. Their recent EP was released on Shelflife earlier this year. Sadly, Carys left after the single was recorded, but the band have recently recorded a second session for Dandelion Radio with new drummer Shaun (ex-Wedding Present/ Popguns).

Could you tell us how The Fireworks began?
The Fireworks was started by Matthew in Bristol as an on off, on off thing. In the first rehearsal he was the drummer! After time, people convinced him to just finally DO IT, so he drafted in some of his friends from around South East London including original members Carys (The Give It Ups) and Matt (A Fine Day for Sailing) and they started playing gigs. I (Emma, Pocketbooks) was originally a guest singer on one song, but eventually became a full-time member. Isabel (Things In Herds) replaced Matt when he departed to focus on his other bands, and then when Carys left to concentrate on her studies, Isabel asked her old friend Shaun (The Wedding Present/Popguns) to join. But is he any good? Well, we decided to give him a go. There are also others who may have stood in, or rehearsed with us once, who can say ‘I was a Firework’!

What are your roles within the band?
Matthew sings, plays guitar and blows things up; Isabel plays bass and brings savoury snacks; Shaun plays the drums and brings the beers; and I sing and bring the jaffa cakes.

What’s been the reaction to your recently released EP?
It’s been great! We were absolutely thrilled to be picked up by Shelflife, which is a label we’ve admired for some time. We’ve had some lovely things written about the EP and it feels like we’ve got a lot of support both in the US and UK. To us it just feels like four mates having a laugh and making some noises we like, so the fact that people like the result of that is brilliant!

How do you feel about playing Indietracks again?
We’re pretty excited! Actually only Matthew has played Indietracks with The Fireworks before, as the band was still in its formation the first time round, but apart from Shaun we’ve all been at Indietracks from the beginning (Matthew has DJed in the past, Isabel is DJing this year, and I’m involved in the organising). We’re looking forward to seeing Shaun’s reaction to it as it’s his first time. It’s always difficult to paint someone a picture of Indietracks - they just have to see it for themselves.

What else can we expect from The Fireworks this year?
Just after Indietracks we’re going back into the studio to record our next single for Shelflife. We’re rehearsing those songs right now, and we’ll also be doing an album at some point in the near future. We’re playing with The Wedding Present in August and the Nottingham all-dayer in September, both of which we’re really chuffed about. Apart from that, we’ll probably keep blowing things up and eating snacks.