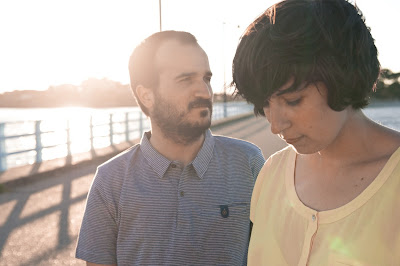 When Nalda Became Punk started as the solo project of Elena Sestelo (Vigo, Spain). In 2006 she gathered some songs, and released “Tiny noises make tiny music” her first demo, though at the time the name of the project was just Nalda. After a long break, she came back to recording songs during summer of 2010 when she finished her second demo “Time to meet your family” which was her first release using the name of When Nalda became punk.

Later on, in 2011 Roberto Cibeira joined the band and the actual formation of When Nalda Became Punk began the recording of their first 7” single for Pebble Records released on August. During 2012 the band played several shows, including Madrid Popfest and recorded their debut album, “A farewell to youth”. As the previous single, it was produced and recorded by Eva Guilala and Ivan Juniper from the Spanish band Linda Guilala at their Kaiju Studios (Vigo, Spain) and was mixed and produced by Ian Catt (producer of Saint Etienne, the Field Mice, the School, Nosoträsh, the Proctors, etc). The album was released by Shelflife Records at the beginning of 2013. Mark caught up with Elena for this Indietracks interview...

If anyone going to Indietracks 2013 hasn't had chance to check you out yet, how would you describe your music?  It's not 'Punk' in a Sex Pistols sense is it?
I think the best way to describe our songs will be as indie pop lo fi, full of guitars, synths and drum machines. It's definitely not punk as in the Sex Pistols sense. I guess is more punk in a DIY sense, more like a Helen Love punk.

What track from your new album 'A Farewell to Youth' would you suggest people check out first? My favourite is 'Summer, You and Me'.
I agree with you, I think that song is perfect for showing the concept of the band, in fact that's the one we chose for being include in the Indietracks compilation. But I won't say that's my favourite, because my mind keeps changing about which song I like most...

Indietracks is a festival with a really great atmosphere.  How does playing festivals compare to club shows?
Club shows are alright, mainly for small bands like us, but we really love to play in festivals such as Indietracks or any Popfest because of the incredible atmosphere people create, they get truly involved into your music. It's quite emotional to play in front of such a friendly audience and get in touch with other bands or people, from a lot of different places that come together, from time to time, just to enjoy the same music as us. Also, Indietracks will a very special show for us, as it will be our first show with four people on stage! As our friends Antonio and Bruno, will be joining us there, playing keyboards and bass guitar respectively.

Who are you hoping to watch at Indietracks?
Lots of bands! I got stressed looking at the schedule, we are very excited about watching Helen Love, which is one of our favourite bands from all time. But there are a lot more that we want to watch such as Alpaca Sports, The Pastels, Big Wave, Martha, Finnmark!, Fear of Men, Brilliant Corners and a really long etc.

Will you be riding the train at all?
Of course! It's our first time at the festival and we will be enjoying it the three days, we want to participate in it as much as we can. We are looking forward to the shows, but also to the workshops, the DJs and everything that takes place at the festival.

Finally, Spain is sunny - England isn't, so will you cope if Indietracks gets a little wet & muddy?  I have a spare umbrella if you need one!
Well, we are from Galicia, at the north of Spain, and the weather there is similar to the English one, so we are used to the rain. Of course we prefer that there will be no rain but we won't really care if it gets a little colder or wet. Thanks for your umbrella anyway, we'll travel on a low cost so we won't be able to carry ours! Will be it big enough to cover all of us?