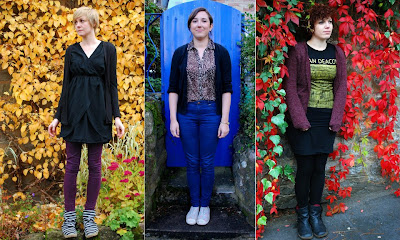 Interview by Sam from A Layer Of Chips.

Haiku Salut are a Derbyshire-based trio that use accordions, ukeleles, glockenspiels, pianos, loopery and laptopery to create sounds that have been likened to early múm, Detektivbyrån and the soundtrack to Amélie. Their debut album Tricolore was released earlier this year on How Does It Feel To Be Loved?, picking up glowing reviews from The Guardian, Uncut, Drowned in Sound and loads more. Sam interviewed Louise from the band ahead of their Indietracks appearance.


You've had quite an exciting year so far, haven't you? What's been the highlight?

We bloody have! We’ve done so much this year; our album release, going on tour, playing numerous weddings. Touring France was up there though, playing with Gang Clouds, a new favourite band of ours! We were constantly lavished with plentiful amounts of quiche. We did try our best at speaking conversational French to the locals, but ended up calling them an ‘old goat’ and proclaiming ‘I want to do some ironing’. I also need to mention our Derby Album Launch, which was where we premiered our lamp show – it was probably the most exciting night we’ve ever had as Haiku Salut! Oh, and lastly, being played on the radio by Jarvis Cocker!

Are you at all surprised about the reception your ace album has received?

We never imagined it would be as well received as it is - it’s a huge compliment. Our label ‘How Does it Feel to be Loved?’ has had a huge part in spreading the Haiku love. They’ve spread it over Europe and America now too! We’re glad to see it doing so well, and hope that we can match it with a second album soon.

Your stage shows are quite complex. Do they ever go horribly, horribly wrong and you end up playing each other's instruments by mistake?

Oh yes! Sometimes we’ll start a song and realise we’re all on the wrong instruments. Sometimes something will just start beeping for no reason. With so many instruments and a fairly complicated stage set-up, things are bound to go wrong, some of which we can just about get away with, others you will know about! Our set-lists often involve individual instructions for each song, e.g. SET THE LOOP! MOVE THE ACCORDION MICS! FOR GODS SAKE, DON’T FORGET TO TRANSPOSE THE KEYBOARD!

What's that weird Simon Says-alike thing you play? I'm deeply drawn to it...

You can only mean the Launch Pad! This was a fairly recent addition to Wheezy and the Gang (our family of instruments). Our music tastes were changing and electronic music was becoming more of an influence, so that’s how our sound ended up progressing in that direction. Plus, the Launch Pad looks awesome, with it’s flashing lights, oooooh!

Remember the time you played Indietracks as part of The Deirdres? I think that's my favourite ever Indietracks memory. What did you make of it?

Those were some very fun times! We have the fondest of memories of jumping and dancing around on stage like a bunch of idiots, with, if I remember correctly, pound-shop medals round our faces. Those were the days! We still enjoy performing now, just in a totally different way.

What are you looking forward to this time around?

The amazing atmosphere of Indietracks and the lovely, lovely people are what make it so special for us! It’s such a great festival to be involved with and we’re lucky to be performing in the church again… this time with our lamp show! Also looking forward to making shapes at the legendary indie-pop discos. Top bands for us this year are The Middle Ones, Lardpony and Cars Can Be Blue.

If you could arrange for Detektivbyran to reform for one night only, that would be great, thanks. Dan Deacon, as he is epic live. Oh, and Madonna of course.